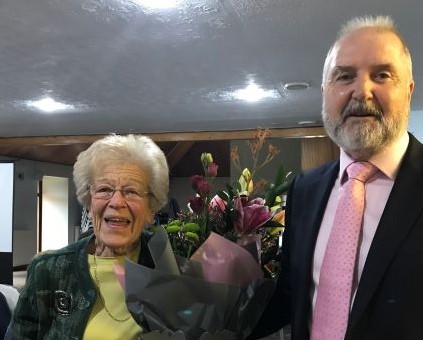 Retiral of long-standing Board Member

Brenda White, a long-standing member of the Trust in Fife Board, retired from her Directorship at this year's Annual General Meeting. Brenda was thanked for the many years she had given of her time to the voluntary sector. Firstly being appointed as a Director of the Nearly New Shop, Kirkcaldy in 1989; Director of Kirkcaldy Homeless Trust in 2001; and subsequently a Director of Trust in Fife in 2008 (upon the merger of Kirkcaldy Homeless Trust with The Lomonds Trust). Brenda having also been given an MBE in 2000 for her services to YWCA Kirkcaldy.

All at Trust in Fife wish Brenda well; with a small gift being presented.